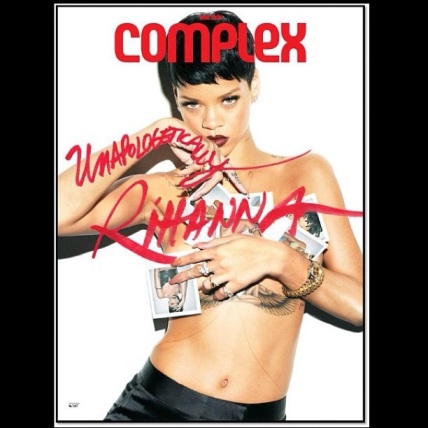 In honor of her seventh studio album, Unapologetic, Complex Magazine revealed seven covers featuring non other than the bad girl herself, Rihanna. The multiple cover shoot was photographed by Zoe McConnell and inside the singer revealed details about her beloved Instagram account, collaborations with Chris Brown, the 777 Tour and much more.

According to Complex, Rihanna has 4.3 million followers on Instagram and has taken over 230 self portraits. “Get a good light,” she advises. “Get a good angle on what’s working for you that day… If it’s boobs, make sure you hit that. If it’s face, make sure it’s fierce,” she continued with her self-portrait pointers.

For many, I can bet that was valuable instruction. To read the full story and view all of the photos, visit Complex Magazine online. 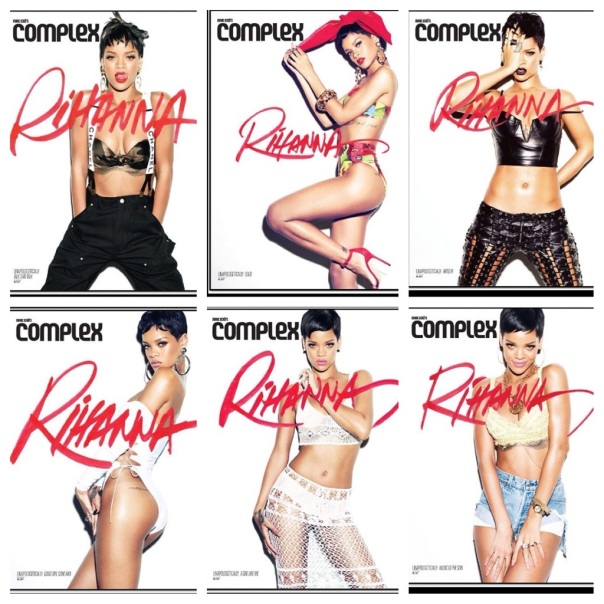 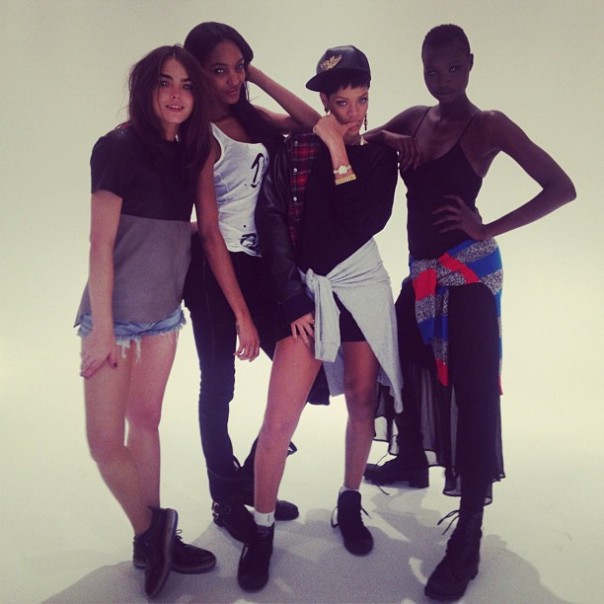 The Unapologetic singer Rihanna recently announced that she would be partnering with British retailer River Island to design a Spring/Summer 2013 collection called Rihanna For River Island.  Today, bad girl Ri Ri gave us a sneak peek into the campaign shoot that she directed. The campaign was shot by Mario Sorrenti at Milk Studios in Los Angeles. British model Jourdan Dunn, Australian model Stef Bambi and Sudanese-American model Ataui Deng were featured in the shoot.  She tweeted:

My bitches so Bvalgari… Just directed my first ad campaign for my new collection with River Island, Spring/Summer 2013!! And that’s a wrap at the end of a 2 day shoot w/ MARIO SORRENTI

Sneak Peek: Rihanna Glammed Up for VS Fashion Show 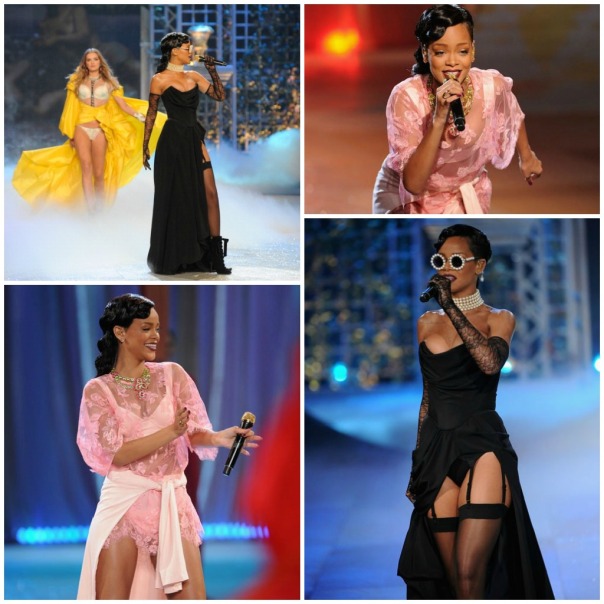 On December 4th, you can catch bad girl Rihanna on the Victoria’s Secret runway. The popular fashion show never fails to give us sexy but the Unapologetic singer turned it up a notch.  Rihanna sang her single “Diamonds” in a floor-length, high-slit black dress and later returned with a delicate pink dress.

Also on the list of performs were Justin Bieber and Bruno Mars.

Rihanna Signs On As The New Face of Barbados 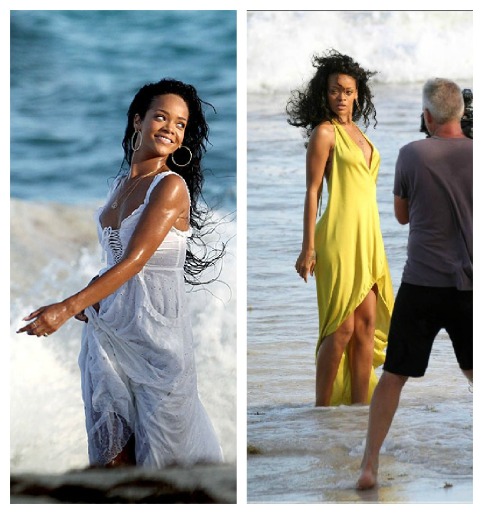 Rihanna inked a three-year deal to become the new face of Barbados. Rihanna will be an official ambassador for her native country with the hopes of  boosting tourism.

The singer was seen shooting the campaign on one of the island’s beautiful beaches and the campaign will launched in September to kick-start the winter tourist season.

“I wasn’t drinking enough water before, and I love coconut water,” the Vita Coco celeb spokeswoman tells Us Weekly. “It hydrates me just as much as regular water so it really started to affect my diet and the way my body was shaping up.” [SOURCE]

The campaign photos were released Monday (June 4th) and you will soon be able to see them in print and on billboards. Rihanna will be hosting a Twitter contest for her fans. She will ask for your help to pick the next photo to go up on billboards but for now you can watch behind-the-scenes footage below.

Rihanna gives us a new video for her new single and one of my favorite songs, “Cheers (Drink to that)” from her latest album, LOUD. The video features moments from her world tour and personal time this summer. Evan Rogers and Ciarra Pardo directed the video.

Queen B also released a visual for one of her favorite songs, “1+1”. She directed the video along with Laurent Briet and Ed Burke.  We can expect more videos from B, as Columbia Records has said that this is the first of many to be released. They plan to visually tell the 4 story.

The nation’s best-selling coconut water, VITA COCO announced that Rihanna will be featured in the company’s summer ad campaign which will be seen around the world.

Rihanna is a natural fit for the Vita Coco brand and I’m so happy to have her on the team,” said Madonna, an investor in the beverage brand. Rihanna also feels it is a good fit for her. “I love Vita Coco! It’s real coconut water from hand-picked coconuts. It’s delicious and so good for you!” says Rihanna.

Honestly, I hate coconuts but these ads and the press behind them make me want to at least give it try…like one sip. 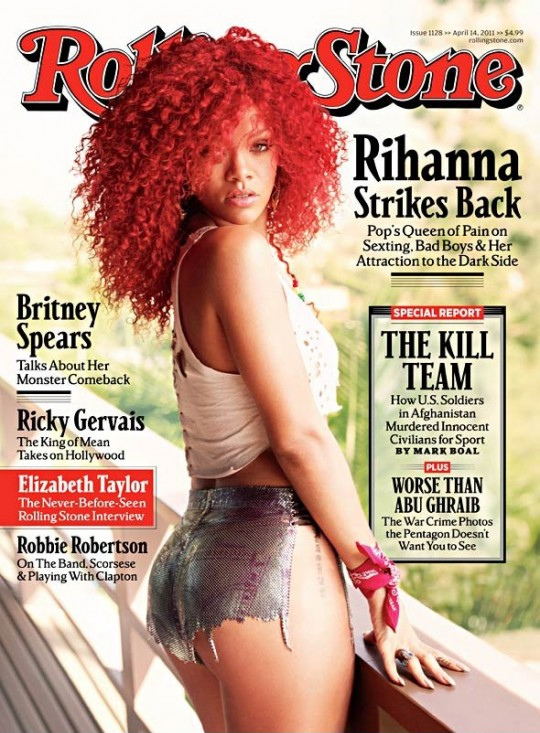 On the April cover of Rolling Stone Magazine, you can find pop diva, Rihanna with spicy red hair, model 101 chin on shoulder pose, and barely there short shorts. The singer opens up about Chris Brown and her sex life…juicy.

“That’s my decision. It doesn’t mean we’re gonna make up, or even talk again. It just means I didn’t want to object to the judge. We don’t have to talk ever again in my life. I just didn’t want to make it more difficult for him professionally. What he did was a personal thing â€“ it had nothing to do with his career. Saying he has to be a hundred feet away from me, he can’t perform at awards shows â€“ that definitely made it difficult for him.”

“Being submissive in the bedroom is really fun. You get to be a little lady, to have somebody be macho and in charge of your shit. That’s fun to me…I like to be spanked. Being tied up is fun. I like to keep it spontaneous. Sometimes whips and chains can be overly planned â€“ you gotta stop, get the whip from the drawer downstairs. I’d rather have him use his hands.”

I think it’s great when celebrities open up, not completely but just enough to show their fans they are human and can relate to some of the fans’ life experiences. Good for Rihanna for opening up to her fans.