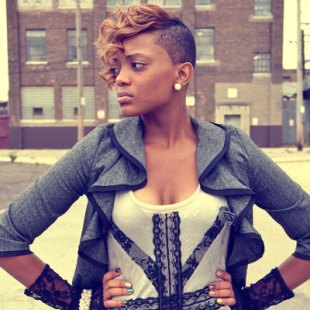 Known as one of Chicago’s Top R&B Artist, Tia London  not only sings but raps and writes music as well. She has been compared to Estelle & Drake in a perfect combination of two. Although London is new to me, you may remember her on Twista’s The Perfect Storm album. With her ever-growing fan base and direction from The Legendary Traxster, I’m sure her tracks will soon be getting spins all over.

On November 28th, London released her biggest project yet. Love Junkie, London’s EP is her sincerest expression of love. The tone of Love Junkie can be appreciated by both males and females which I love about music.  Her voice is so mellow yet so powerful. London has a quiet confidence which is missing from most female artist.

Tia London is said to be the “next big thing” which makes her a definite artist to watch. Listen to Love Junkie below.

Want a visual from Tia London? Peep her official video for “Nothing On You” below.

I don’t know if I am the only one who noticed it but I think these weight loss programs are having a battle of the divas. Weight Watchers with Jennifer Hudson, Jenny Craig with Mariah Carey and now Nutrisystem with Janet Jackson.

Why wouldn’t you want to “celebrate life responsibly” with CÎROC Ultra Premium Vodka especially when Diddy makes it look so glamorous in his holiday celebration commercial.

The commercial, rat pack style, features music from Frank Sinatra’s “Luck Be a Lady” and a star-studded cast living it up in Vegas. The “good life” portrayed in the commercial makes it hard to resist a bottle of CÎROC this holiday season. Peach for me please! Watch the full length commercial below.

In other Diddy news…Diddy is thinking about tequlia now that he has mastered vodka. He tells E!: “There isn’t one particular tequila that I love and I’ve been spending a lot of time in  Mexico…So in the next year, you will probably see me going  toe to toe with John Paul [Jones DeJoria], who owns  Patrón…I’ll be challenging him to who makes the best, smoothest and most  authentic tequila in the world.”

Grammy winner, song writer and Atlanta Housewife Kandi Burruss plays no games when it come to her Kandi Koated empire. Online show, sex toys and now a  app. Although I think her brand is all over the place, I love her entrepreneurial spirit.

Kandi bragged that her spades app is like no other. “We wanted ours to be like real life,” Kandi explained. “Kandi Koated Spades has all of the real action that we use in Spades, like reneging and cutting,” said Kandi.  KKS also features online multiplayer, custom avatars, in-game profiles, practice mode and Twitter.

KKS was developed by Konsole Kingz owners CJ Peters and Marcus Matthews. The app is already topping the top 10 in iPhone Card Apps coming in at #4. “I love this app and I know my hardcore Spades players will too,” Kandi said.

Check out her behind the scenes video at the KKS photo shoot.

Surrounded by bodyguards, Victoria’s Secret model Chanel Iman unveiled the glamour apple-shaped bottle after keeping it under lock and key in a bullet and fire-proof briefcase. The apple’s diamond encrusted skin may have made a debut but the scent inside  is the same. Not sure how many of these bottles will sell but if you so choose to spend the big bucks, net proceeds from the sales will go to the Action Against Hunger charity. 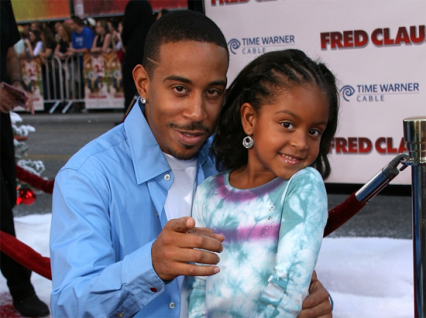 Rapper Ludacris took a break from his SUPA DUPA  beef with Big Sean and Drake and moved on to something a bit more important. Ludacris announced the launch of Karmasworld.com, an educational website for kids. The site is dedicated to his 10-year-old daughter Karma and was inspired after she expressed following in the foot steps of her father.

“She kept telling me how she waned to be a singer, so I thought ‘this is perfect, but it needs to be about what’s going on in your life’ and her life right now is pretty much school,” Bridges told the Huffington Post. The fun educational site uses original pop songs to teach lessons in math, science, ethics, geography and so much more. Karmasworld.com is designed for students in the first through sixth grades and includes lesson plans for parents and teachers.

I can’t see how any elementary student wouldn’t want to at least check it out especially with Luda’s name attached it. Thumbs up! Sorry, I might be slightly biased. Anything Luda does gets a thumbs up from me.

Love & Hip Hop’s Somaya Reece is diligently trying to come up. In addition to her music, Miss Reece is adding spirits to her brand. Coming to a liquor store and bar near you is a nationally distributed tequila brand by the self-proclaimed “boss”.La Jefa Tequila means boss and  is a 80 proof agave silver “with a smooth taste to mix in specialty drinks or taken as a single shot.” Bottles will be stocked early 2012.

In a video for their holiday 2011 campaign, fashion brand Kate Spade is continuing with their Year of Color through the holidays and encouraging you to “Give Colorfully“. Love it!

After all the free press rap honey Nicki Minaj has given Mattel, the two have FINALLY teamed up for an actual Barbie replica. Nicki busted out of the gate rocking huge Barbie chains, colorful wigs and pretty in pink lipstick. In addition to her beloved Barbie image, her very loyal fans quickly became an army of “Barbz and Kens”.  Now Nicki and Mattel have an official relationship and she has a Barbie of her own.

On Wednesday December 7th, a one-of-a-kind Nicki Minaj Barbie doll will be available for auction on CharityBuzz.com. Bids will start at $1,000 and will be received until December 19th. All proceeds will benefit Project Angel Food, which provides food for men, women and children affected by AIDS and HIV. Minaj joins Carol Channing, Rachel Zoe and Janet Jackson all of which who have also had Barbies made for the charity.

“Barbie is obviously a pop culture icon. She’s been in the spotlight for over 50 years, and strikes that chord with girls of all ages in terms of being representative of the times. And Nicki is a big part of pop culture and also huge within the fashion industry, as well as a big Barbie fan,” says Stefani Yocky, a Barbie spokeswoman.

Nicki told Billboard, “this is a very major moment for me”. I would have to say I agree. Her brand has come full circle and not many people can say that.