Rapper T.I. is gearing up for the release of his new album Trouble Man: Heavy Is The Head on December 18th. T. I. is counting down the days until his release and he is bringing us along for the ride. In a 5 part video series, you can get a behind-the-scenes look into a promotional day for the Trouble Man. Check out the first episode here!

Wendy’s audience was in for a special treat today when Tamar Braxton and Wiz Khalifa stopped by the show.

Tamar just debuted her new single, “Love and War” which shot to #1 on iTunes. She stopped by to perform the hit for the first time on daytime television. Tamar graced the stage and even got a couple of tears out of Wendy after she hit the high note.

Tamar left her mark on the stage and rapper Wiz Khalifa left a scent on the couch. He talked marriage, fatherhood and his new album O.N.I.F.C. with Wendy.

Watch the two below!

NEW Video: Beyonce – “Dance For You”

Beyoncé debuts her video for they sexy “Dance For You” track. The video has an old time feel as it is a tribute to film noir. Queen B will be unveiling the video tonight on E! News but you can see it here.

Tags: Beyonce, Dance For You, Video

Yet another one from the Ambition rapper Wale this week. Wale and MMG leader Rick Ross take us to the tattoo parlor for Wale’s newest video “Tatts On My Arm”. The visual was directed by Dre Films.

It’s no doubt that Wale’s “Lotus Flower Bomb” is a hit. Some have argued that Wale went too MMG on us but it is clear that this Miguel assisted track is classic Wale.  Finally, Wale gives us the visual to the song we all love so much. America’s Next Top Model Bre plays Wale’s love interest and together the pair took me back to Poetic Justice for a moment. Enjoy! 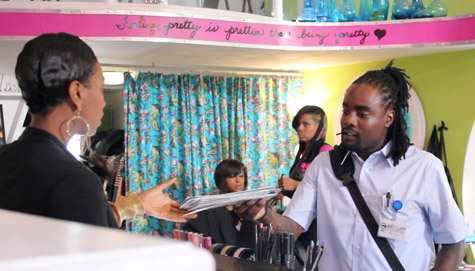 America’s Next Top Model Cycle 5 contest Bre Scullark may have been recently booted from ANTM All-Star but she is proving to be a star without the show. Bre will be the front girl in Wale’s “Lotus Flower Bomb” video featuring Miguel. In the video shot last week, Wale plays a delivery man whose crushing on a salon owner who will be played by Bre. The sneak peek photos from the shoot look hot and steamy so, I’m assuming the story line ends well and Wale is a happy man in the end.

With the release of his sophomore album, Wale has been super busy but his video co-star also has a packed schedule. Word around the net is Bre has a lot coming up. Look for her in an upcoming role on CSI, an Old Navy campaign, on Tyler Perry’s new sitcom ‘For Better Or Worse’ and Garnier commercials. For now, peep two shots from the pair below.

Lil Wayne – “How To Love” Video

Got to love a video with some substance. Lil Wayne’s “How To Love” video premiered Tuesday night and tells the story of a troubled girl and her alternative.  The video really shows the importance of strong decision-making and the possibilities after breaking the cycle.  The video directed by Chris Robinson. I didn’t expect this from Wayne but I’m pleasantly surprised. Watch below.

Wayne is prepping for his album release. The Carter IV will drop August 29th right after the VMA’s.  I imagine lots of promo during the show…well if he’s smart.

Miguel released a visual for his newest hit single, “Quickie”. I had the pleasure of hearing this song years ago when Miguel’s management team was still figuring out his image. I am glad to see they are letting him be him. For some reason, I get the feeling that Miguel is in charge of his style and if he is not steering his own career than he is at least in the front seat. He has come a long way and is being received extremely well.

Check the video below.